Much of the commentary around negative gearing appears based on the presumption that it is the exploitation of a loophole by investors in residential property, when of course, it applies to an entire range of asset classes. Negatively geared investments contains risk and will only provide a benefit to an investor when the accumulated capital gains (after-tax) over the holding period outweigh the cash flow losses incurred during the holding period. If this is not the case then the investor is left with losses.

It’s the after-tax part that’s the issue with negative gearing, whether it be for property or shares. Why should investors be allowed to offset investment losses against their current wage or salary income? Such deductions are not allowed in most other countries and they cost the Budget billions in foregone revenue. They also artificially increase demand, which leads to higher prices and a mis-allocation of capital, not to mention worsening the equity and integrity of the tax system.

It is also important to recognise that property investment is not the domain of the wealthy. According to the Australian Taxation Office, 77 per cent of taxpayers with property rental income have a taxable income of less than $80,000.

This is partly true. The majority (72%) of negatively geared investors do earn less than $80,000 per year:

However, the proportion of people holding negatively geared property also rises with income: 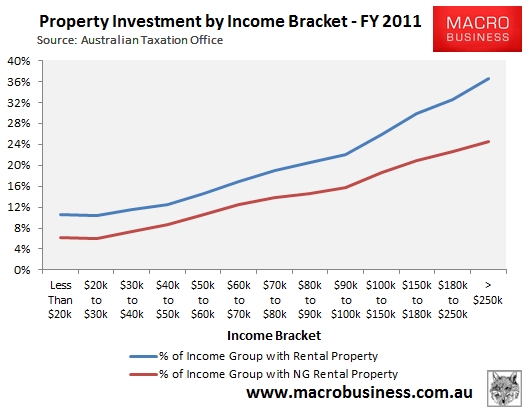 As do the losses claimed: 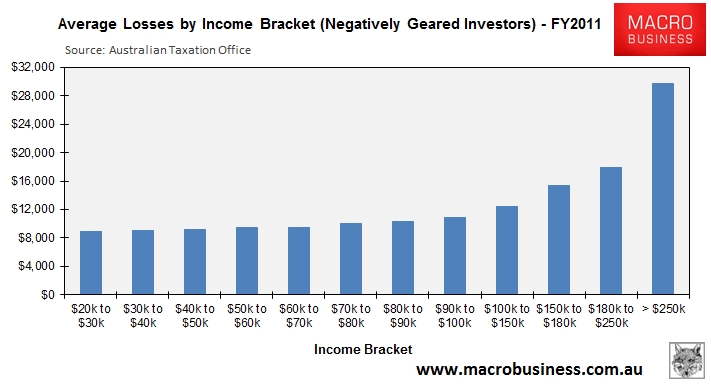 Back to Goodwin (my emphasis):

The taxation revenue forgone from negative gearing is around $2 billion annually. Contrast this with $5.2 billion spent by the Commonwealth under the Social Housing Initiative to bring 19,700 homes to the market. A significant addition to the public housing stock, but the equivalent of about 1 per cent of the private rental market. If changes to the taxation treatment of investment in housing did see investors exit the market, will governments have the appetite, or means, to fill this gap? Would property prices drop across the board?..

The most important part of Goodwin’s statement is the assertion that negatively geared investors would exit the market en masse, leaving renters on the street and forcing-up rental costs. Unfortunately, it does not hold-up to scrutiny.

Reserve Bank of Australia (RBA) data clearly shows that the overwhelming majority of investors – almost 95% – buy pre-existing dwellings, not newly built dwellings, and that the proportion of investors buying new dwellings has fallen spectacularly since negative gearing was re-introduced in September 1987 (see next chart). 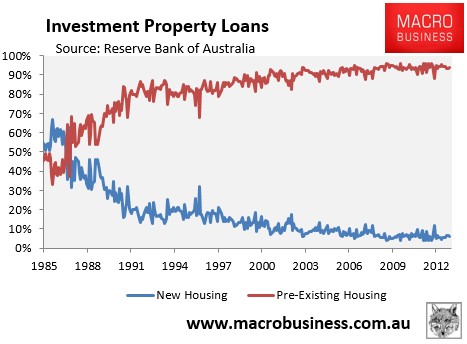 Moreover, the amount of investor funds going into new housing has barely shifted in 25 years, whereas investment in pre-existing dwellings has skyrocketed: 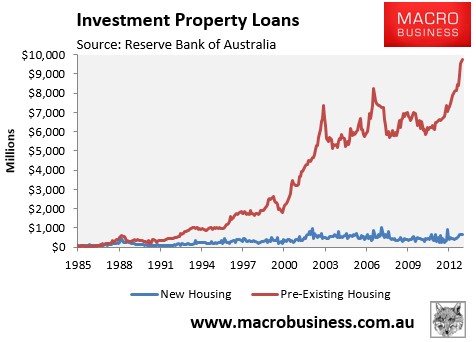 Because investors primarily purchase pre-existing dwellings, negative gearing in its current form simply substitutes homes for sale into homes for let. As such, negative gearing has done little to boost the overall supply of housing or improve rental supply or rental affordability.

In the event that negative gearing was once again quarantined and a proportion of investment properties were sold, who does Goodwin think they would sell to? That’s right, renters. In turn, those renters would be turned into owner-occupiers, in turn reducing the demand for rental properties, leaving the rental supply-demand balance unchanged.

Nor would rents be expected to rise. The below chart plots the Australian Bureau of Statistics (ABS) rental series from 1972, with the period where negative gearing losses were last quarantined (i.e between June 1985 and September 1987) shown in red. As you can see, there was nothing spectacular about this period, with much higher rental growth recorded in earlier periods when negative gearing was in place: 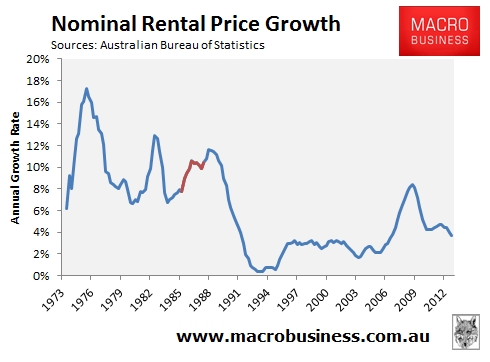 Similarly, if we deflate the above series by CPI, in order to remove the effects of inflation, we again see that rental growth over the period when negative gearing was last quarantined was nothing special, with periods of higher rental growth recorded both prior to and subsequently: 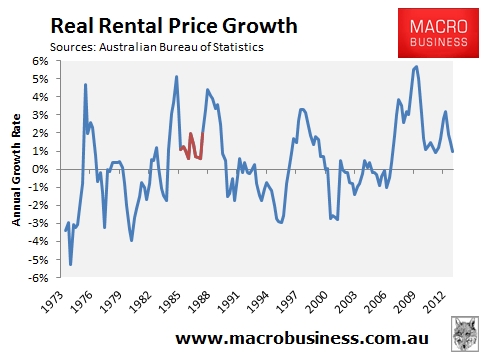 The fact remains that negative gearing is costing the government billions in lost tax revenue, but is doing nothing to boost supply. It also creates additional demand from tax subsidised investors, placing upward pressure on home prices and locking-out would-be first time buyers.

In short, there is little policy rationale in favour of keeping negative gearing, whose foregone funds could instead be used to fund schools, hospitals, housing-related infrastructure, or any number of other worthwhile endeavours. That said, while I strongly disagree with Goodwin’s support of negative, I do strongly agree with him that negative gearing is not the major impediment to affordable housing, with supply-side barriers a bigger problem:

A good place to start is with reducing the excessive and inefficient taxes on new housing, and untying the red and green tape that add further costs to building. At the same time, we need to reverse years of anti-development mentality that have created road blocks at every turn. While everybody has a story about a friend or family member that can’t buy their first home, too many people also oppose residential development in their suburb…

More accurately, there has been a decade of neglect and an absence of political will to address housing supply, which has delivered an inevitable concoction of renewed demand amid a contraction in relative supply.