The Best of the Best in NSW Real Estate

Winners named in the EAC/REIA NSW Awards for Excellence 2014.

Sydney, NSW – 25/9/2014 – EAC/REIA NSW Awards for Excellence 2014, today announced its 2014 Winners. Embodying excellence and professionalism in the real estate industry, the honorees were celebrated during the awards ceremony on 25th September at the Sofitel Wentworth, Sydney.

The inaugural awards saw applicants compete for a total of 13 awards covering all aspects of the real estate profession from innvovation to corporate support, business broking and of course the highly contested award for the best small, medium and large residential agency.

The Awards for Excellence allowed nominations from the industry, through NSW Affiliate Council Members of the REIA including Estate Agents Co-operative, LJ Hooker, Professionals Real Estate and First National with winners being selected by a panel of industry experts who judged each submission.

The 2014 Awards for Excellence were presented to: 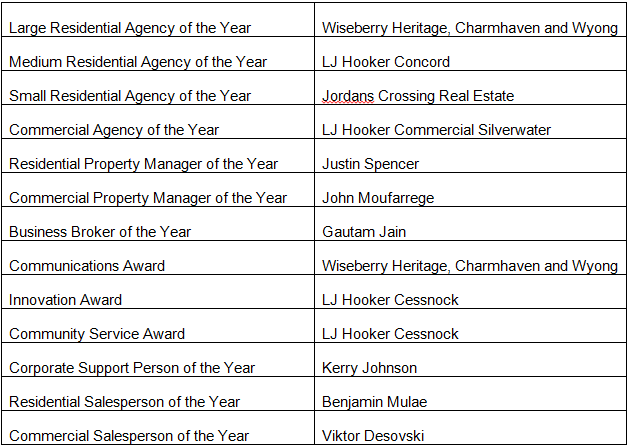 “The Agents and Individuals named as winners have set the standard for all real estate agents across NSW and Australia,” said David Crombie, CEO of EAC.  “Their naming as award winners is a testament to their skill, ingenuity, and professionalism.”

“These awards are important in not only recognising NSW’s leading real estate professions, but also as they provide an important opportunity for agents to learn from one another and also strive to produce innovative ways of doing business,” said Amanda Lynch, CEO of REIA.

About EAC:
Estate Agents Co-operative Ltd, or EAC, is a co-operative of real estate agents, which formed in Sydney in 1960 to exchange information about properties for sale.  From humble beginnings, when EAC comprised just seven members in the metropolitan area, the Co-operative has now grown to include several hundred members across New South Wales and the ACT. EAC is a premium service provider to the real estate and property industry and provides a range of services covering, Membership, Practice Support, Training, Listing Management, Property Information, Web Sites and Real Estate Forms to over 2,000 Real Estate offices comprising of both independent offices and franchises from all the major franchise groups, valuers and government departments throughout Australia.

About REIA:
The Real Estate Institute of Australia (REIA) is the national professional association for real estate agents in Australia and since 1924 has worked to represent the real estate sector on a range of varied and important issues.